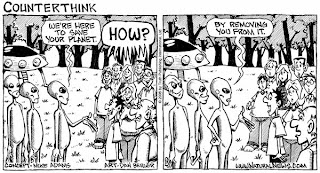 
«Whoever has a bit of plain common sense in the upper part of his body does not need a degree, nor a few capital letters behind his name, to understand that the present state of universal disorientation and unrest in all spheres of human activities – added to the horrible mess of war, greed, hatred, poverty, slums, disease, pollution and so forth that has been left by previous generations – constitutes the most evident proof that we are all carried away on the wrong track, by conductors who have lost their way and do not know where the heck they are going.

But day after day, through the means of vast media of information, all the passengers on the big train are being told that things are slowly but gradually improving, and that the right course should soon be found.

However, facts are facts, and the facts are that the past few decades have been the most prosperous as well as the most violent in the history of our planet, that internal disorders and international complications have never been so chaotic as they are today, and that the human minds and hearts have never as yet been so filled up with half-truths and with so much confusion, anxiety, fear, and despair».